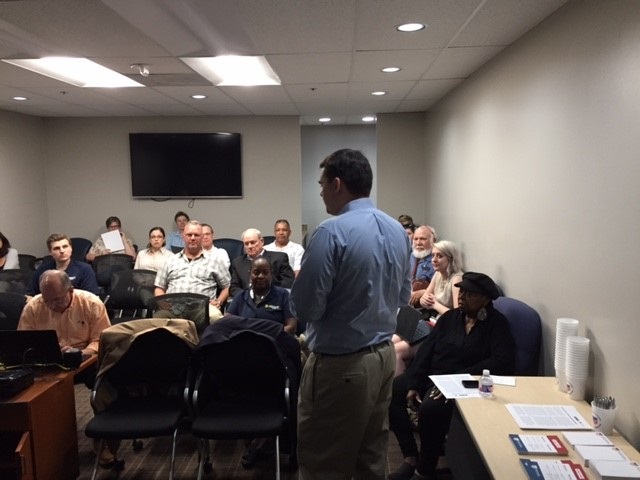 This week, freedom-loving Texans joined the Concerned Veterans for America Foundation for its premier events in a brand new series – Learn the First. Patriots in Dallas and San Antonio came together to learn about our rights and how to protect them.

CVA Policy Director Dan Caldwell joined the Foundation to share the importance of the freedom of speech and insight into threats that free speech faces. Despite its codification in the First Amendment, free speech is not always guaranteed.

Those with political agendas and special interests will often attempt to stifle free speech in the name of transparency. For example, South Carolina State Senator Hugh Leatherman – a Republican – has pushed for “transparency” many times due to the fact that grassroots organizations, made up of his constituents, have been successful in killing his burdensome gas tax bills. He now wishes to expose those who support and volunteer for these grassroots organizations, which would open them up to retaliation.

Retaliation isn’t just a fear, it’s a reality. In 2014, the nation found out the Internal Revenue Service (IRS) was deliberately stalling the paperwork of Tea Party affiliated groups. A few years prior, an IRS employee had leaked the donor list of a large marriage advocacy organization whose donors and supports saw serious retaliation and intimidation against them.

Caldwell shared several examples of attacks on free speech that come under the guise of transparency and engaged with the crowd on how to identify these threats. These threats are happening in states around the nation, and Texas is no exception. Lawmakers are potentially violating the Constitution all for the sake of silencing their critics, but Texans won’t allow that to happen in their state. Texans stand up and fight for freedom and should encourage their fellow states to do the same.

The CVA Foundation has just begun to educate our activists on these threats to our first rights, but already we are seeing great turn out and craving for knowledge on the First Amendment. Join patriots in Texas who are learning about the First Amendment and gain the resources to protect your rights!