I was a first responder on September 11; here’s what I remember 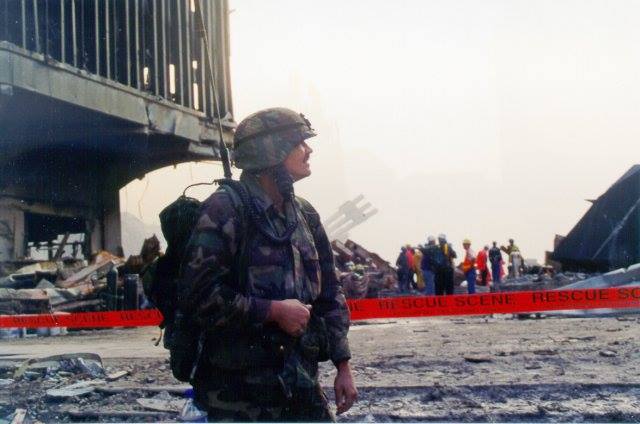 Nineteen years ago, the world as we knew it changed. Hijacked planes crashed into the World Trade Center towers, the Pentagon, and a field in Pennsylvania, shattering what was a clear, peaceful Tuesday morning in September.

Although it’s been nearly two decades, my memories of September 11 in New York are as vivid as if it all happened yesterday.

I was sitting in a classroom in Manhattan. On that morning, I was a combat veteran and National Guardsman turned student. My priorities that day were to go to class and do my schoolwork. But my life changed when a female voice behind me interrupted the professor with a few simple but terrifying words: A plane had hit the World Trade Center.

In that moment, my instincts and training took over as I rushed from my classroom to the closest armory. As I ran through the student lounge, I heard the panic in students’ voices as they watched the South Tower collapse on TV. I waved down a cab, urgently showing the driver my military ID, and insisted he take me to the armory before he escaped to safety outside Manhattan.

Others like myself began to filter in from all over the city. I’ll never forget one active duty Special Forces soldier, who happened to be home in New York on leave, showing up in his Green Beret. He told us it was all he could think of to do.

After hours and hours of “hurry up and wait,” we received our orders. As the sun set, we were headed to Ground Zero.

After securing a line just north of Ground Zero, we took turns walking the last block down to the site. I was reminded of my deployment to Somalia years before. I had seen death and destruction in war, but the war zone was now in my home city. What I experienced in the weeks that followed is still the worst horror I have ever seen.

I watched the wreckage burning as we approached Ground Zero, the smell of smoke and death surrounding everything. I saw a friend desperately search for his sister who had been in one of the towers, though she was already gone. I heard an Army psychologist on the scene question out loud what to do next, as he continued to provide comfort and guidance to those around him. I watched as FEMA’s recovery dogs got too depressed from all the death they found to work longer than a few weeks. We were all feeling that weight.

We worked midnight to noon at Ground Zero for the next two weeks, supporting the rescue and recovery mission of the FDNY chief in charge at the site. We stood guard, directed first responders and traffic, manned bucket brigades, and did any other odd job that became necessary. The first few days we worked around the clock, even during off hours, choosing duty over sleep.

But amid all the destruction I saw in those endlessly long weeks at Ground Zero, I saw the very best of New York and America.

Supplies poured in from around the country. Restaurants and civilians fed first responders with no thought of being paid. New Yorkers cheered us on as we marched down the streets and American flags hung in every window. For weeks after the attacks, there was an overwhelming sense of unity and support I’d never experienced.

I served 17 more years in the military, including two deployments in support of the War on Terror that resulted from the attacks on 9/11.

My greatest blessing that day was to be able to respond quickly and purposefully. My frustrations that came from serving at Ground Zero were minor compared to the frustration I would have felt without a way to respond. America is at its best when Americans serve a cause beyond themselves.

Nineteen years later, our nation has lost the unity of the days following 9/11. We let our divisions control how we see our fellow Americans.

But I believe it is still in us to be who we were on September 12, 2001 – a country and a people ready to serve, ready to support, and ready to unite. As I reflect on the experiences of September 11, I am hopeful we can again unite as a country as we face whatever the future holds.