Should the U.S. help Ukraine? How does the Russia and Ukraine war affect the U.S.? 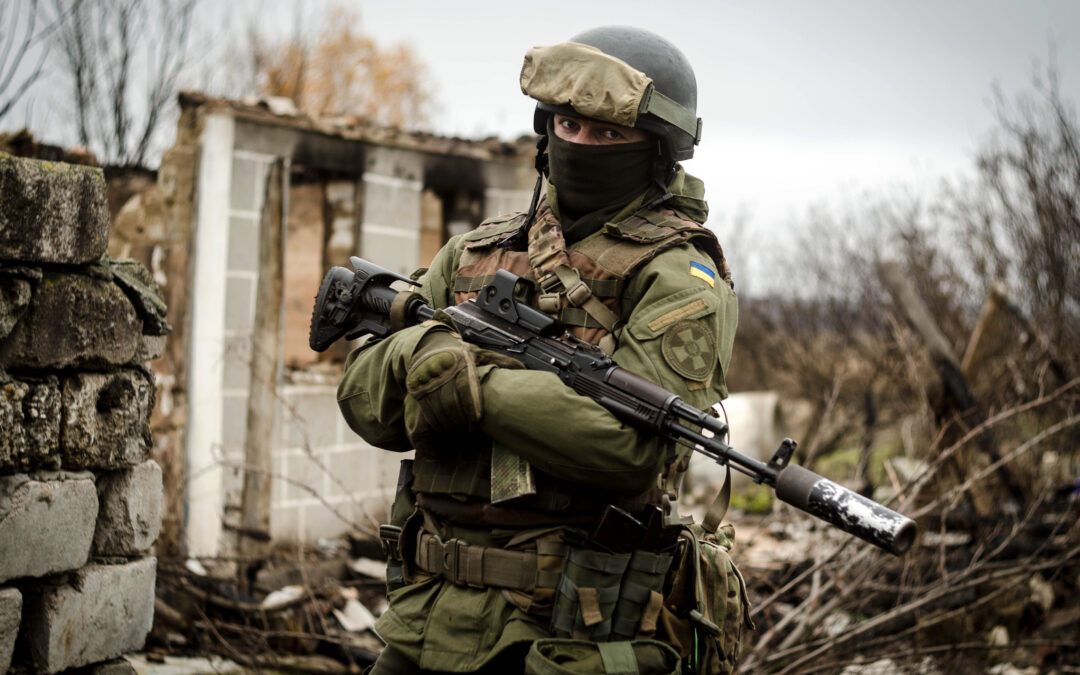 In February 2022, the Russian Federation invaded Ukraine in what it called a “special military operation.” What followed was full-scale war of aggression.

Since then, an estimated 40,000 Ukrainian civilians have been killed to date, millions more have been displaced, and both Ukraine and Russia have likely suffered over one hundred thousand troops killed as the war has dragged on. In short, the Russo-Ukrainian war has been the deadliest in Europe since World War II.

Though Ukraine is not a member of the North Atlantic Treaty Organization (NATO), the United States, along with its European allies, have become heavily involved in the conflict, sending tens of billions of dollars in economic and military aid, as well as intelligence sharing.

In many ways, the conflict has become a proxy war between the U.S.-led West and Russia. Though the U.S. and its NATO allies want to see Russia fail, the alliance’s deepening involvement has led to serious concerns about the potential for escalation of the conflict, including to the nuclear level.

Russia and Ukraine at war: The deep roots of the conflict

While this stage of open war between Russia and Ukraine began relatively recently, the roots of the conflict extend back to the collapse and dissolution of the Soviet Union in the early 1990s.

Soviet and Russian officials repeatedly expressed concerns about NATO expanding eastward toward its borders, and American officials offered verbal assurances that NATO would not expand into Eastern Europe. Despite continued debate about the weight of these promises, archival documents from the time showed that these officials’ Soviet, and later Russian, counterparts believed them.

However, despite the warnings of numerous foreign policy scholars and experts, such as George Kennan, who warned in 1998 that NATO expansion would lead to a new Cold War, and former ambassador to the Soviet Union Jack Matlock, who stated “NATO expansion was the most profound strategic blunder made since the end of the Cold War,” NATO has steadily expanded eastward toward the Russian border.

Since NATO’s inception at the beginning of the Cold War, the alliance has continued expanding eastward. Current applicants and countries desiring membership fall along the border between Europe and Russia, creating more tensions between the West and East

This expansion reached a head in 2008 at the Bucharest NATO summit where the alliance issued a declaration that it welcomed Ukraine and Georgia’s aspirations to join NATO. Even at the time, this step was controversial within NATO—the United States pushed it through over German and French opposition.

This enraged Russian leadership, who began to vocally criticize plans for these two former Soviet states to join NATO. The criticism manifested in the Russian military invasion of Georgia which sought to ensure that breakaway regions within the country would remain de facto independent and prevent Georgia from joining NATO.

This dynamic played out again when the pro-Russia Ukrainian government was overthrown by pro-Western protestors in response to the government’s plans to pursue closer economic and political alignment with Russia instead of the European Union. 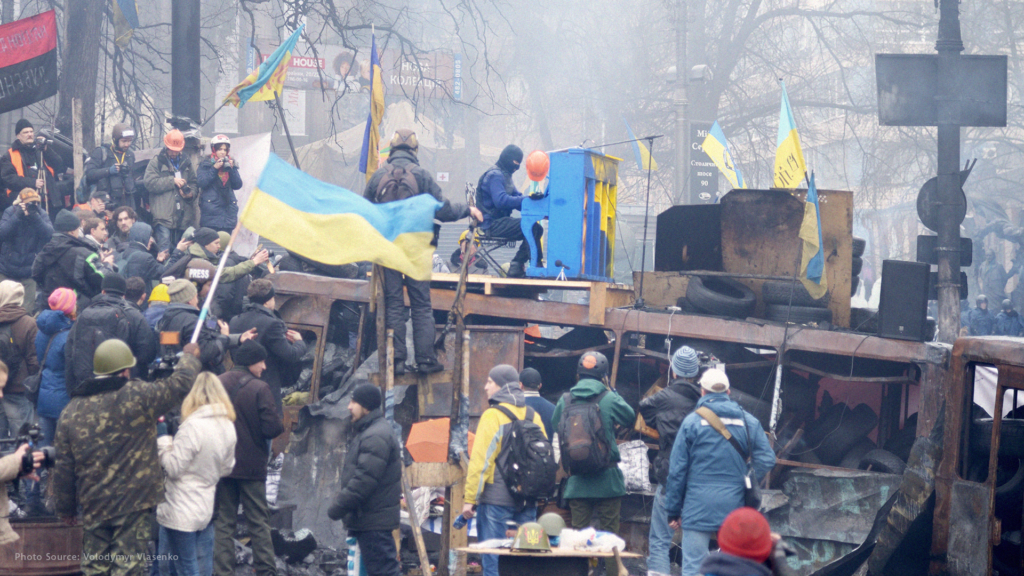 2014 protests in Kyiv’s Maidan Nezalezhnosti, “Independence Square”, that led to the removal of then pro-Russian President Viktor Yanukovych

Russian fears that the U.S. was involved in the protests to install a pro-Western leader were increased when an audio recording leaked of then-Assistant Secretary of State Victoria Nuland and U.S. Ambassador to Ukraine Geoffrey Pyatt discussing who among the Ukrainian opposition should become the new leader of Ukraine.

The situation in Ukraine has been made more complicated by the country’s divided nature. Large parts of the country, especially in the east, speak Russian rather than Ukrainian, have historically voted for more Russia-aligned parties, and even identify as ethnically Russian in higher percentages.

Russia’s invasion has had the unintended consequence of actually helping to unify Ukrainian society against an external threat more than it was previously, but it’s important to understand that these divisions still remain.

In response to the overthrow of the government and the new government’s perceived anti-Russian policies, two such eastern “Donbas” territories – also known as oblasts – Donetsk and Luhansk, declared independence and rebelled against the new Ukrainian government.

The change in government in Kyiv after the 2014 protests and the fear of Ukraine becoming Western-aligned led Russia to annex the Crimean Peninsula in 2014 and to support the rebels in Donetsk and Luhansk.

Russia’s actions were clearly unjust, but their contributing motivations were clear. With Ukraine’s territorial integrity in question due to the Donbas breakaway regions and Russia’s seizure of Crimea, Ukraine was prevented from joining NATO due to clauses about territorial control and rule of law.

The conflict continued to simmer in eastern Ukraine until the beginning of 2022, with several thousand lives lost on both sides. 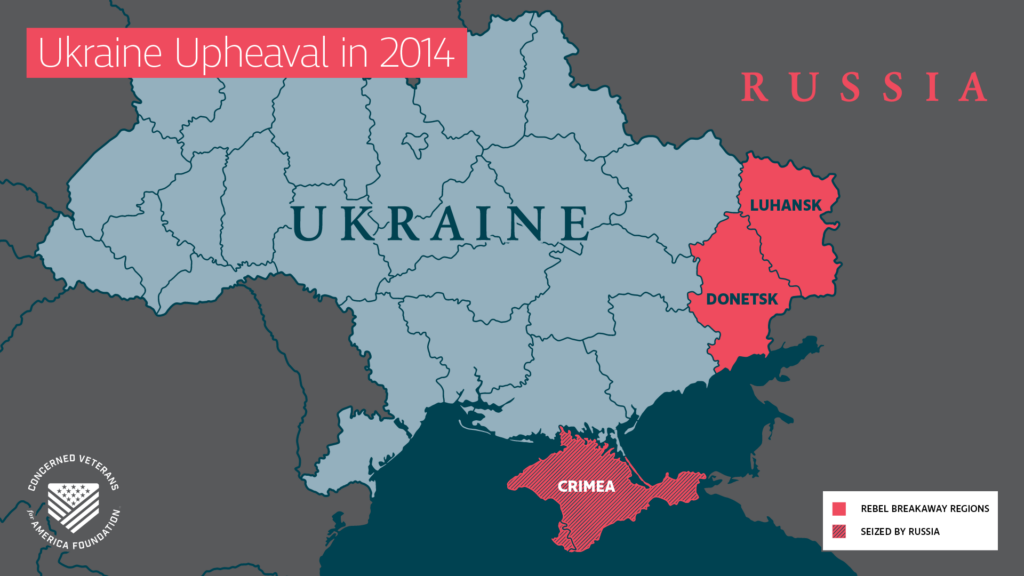 The 2022 Russian invasion of Ukraine

This “cold” conflict became hot in February of 2022, when Russia declared it was launching a special military operation to secure the Donbas region and to “denazify and demilitarize” Ukraine. In reality, Russia thought it would be able to quickly depose Ukrainian President Volodymyr Zelensky with a limited commitment of forces and replace his government with a pro-Kremlin puppet regime.

Russia’s plan backfired amid fierce Ukrainian resistance and poor Russian logistics and strategy that led to its overextended forces having to withdraw from their drive on Kyiv in April 2022.

The war has continued ever since. After a prolonged stalemate, Russian losses in the autumn of 2022 led to additional Ukrainian gains before the winter of 2022-2023, but at a steep cost for both sides.

While accurate estimates are difficult to establish, each side has likely suffered over 100,000 casualties, according to U.S. estimates. A further 40,000 Ukrainian civilians have also been killed to date, and millions more have fled the country or been internally displaced.

The shift from a diplomatic dispute in the fall and winter of 2021-2022 to a full-blown war the following February changed the nature of involvement from western nations.

Since the start of the war, the U.S. and Europe significantly increased their levels of security and humanitarian assistance to Ukraine, with the United States offering the bulk of aid by far. As the war drags on, the risk of such aid, no matter how well-intended, leading to escalation lingers and deepens as the West ships increasingly heavier weapons systems to Kyiv. It is important for the United States and Europe to keep these escalation risks in mind and avoid actions that raise them unacceptably high.

Timeline of U.S. involvement in the Russian-Ukrainian war: U.S. aid to Ukraine

Prior to Russia’s 2022 invasion, the United States had deepened its relationship with Ukraine since 2014, backing it in its eastern civil war against Russian-supported separatists for years. U.S. troops trained and equipped Ukrainian armed forces and provided over $1 billion in Foreign Military Financing and Security Assistance between 2016 and 2022. From January to October of 2022, the United States has provided more than $66 billion in financial, humanitarian, and military aid to Ukraine along with additional billions worth of weapons and aid pouring in from European countries.

And U.S. assistance to Ukraine has not been limited to money and weapons.

The New York Times reported that the U.S. has provided intelligence to the Ukrainian military on Russian troop movements and concentrations that has allowed them to effectively devise Ukrainian counter-offensives, with U.S. planning assistance, and even target and eliminate multiple high-ranking Russian officers. Similarly, NBC reported that it was U.S.-provided information allowing Ukraine to sink the Russian Black Sea Fleet flagship Moskva. 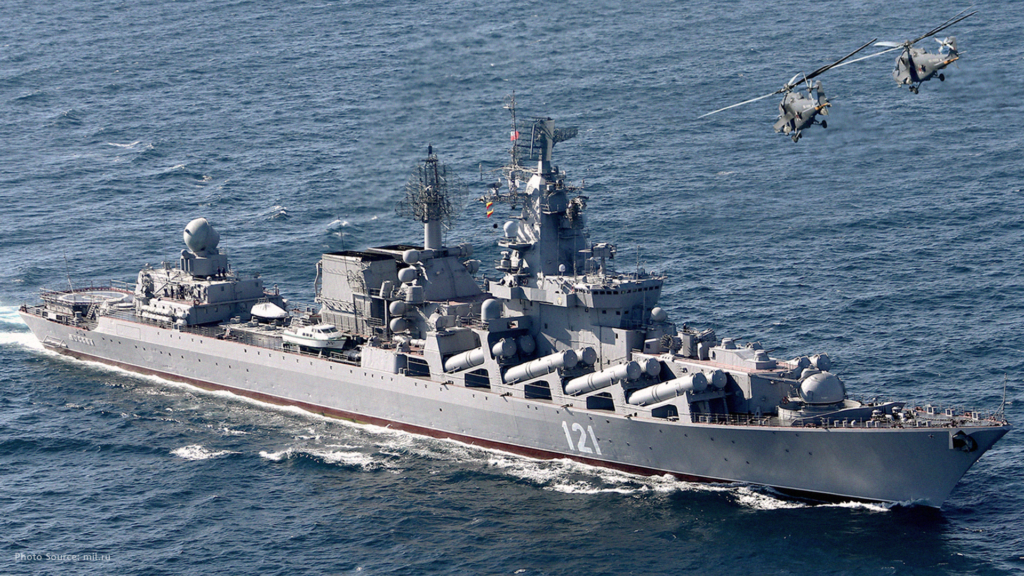 Russian flagship Moskva played a role in the 2014 annexation of Crimea and 2022 invasion of Ukraine. The ship was sunk in April 2022 by Ukrainian forces during Russia’s blockade of Ukrainian ports

This is all a dangerous level of involvement that could lead us down the road of conflict with Russia.

Why is the U.S. helping Ukraine? Does involvement in Ukraine serve American interests?

It’s natural to sympathize with the Ukrainians and the hardships they are enduring from the immoral Russian invasion, but it’s important to ask to what extent American involvement in the conflict supports our own core national interests and what risks to those interests can come with our support for Ukraine.

First, U.S. aid must come from somewhere. By June of 2022, the U.S. had already sent a full third of its stockpile of Javelin anti-tank missiles to Ukraine. Similarly, U.S. military officials  reported American artillery shell stockpiles are now “uncomfortably low” due to shipping so many to Ukraine.

Military aid to other nations should never come at the expense of undermining America’s own military readiness. The weapons we’re providing to Ukraine, such as artillery shells and Javelin missiles, are necessary supplies for our military, and the missiles in particular can’t be quickly replaced. Many such shipments to Ukraine have been diverted from partners in other regions, like Taiwan, or diverted from U.S. stocks in Asia, such as on the Korean peninsula—the tradeoffs are real.

Second, European countries have a far greater national interest in aiding Ukraine, which is in their own backyard, than the U.S. does. But so far, Europe isn’t taking that responsibility as seriously and is providing much less in aid to Ukraine than the U.S. Even European observers note this—the German-based Kiel Institute for the World Economy noted in its working paper tracking global aid to Ukraine that “it is remarkable that the U.S. alone has committed considerably more than all EU countries combined, in whose immediate neighborhood the war is raging.” 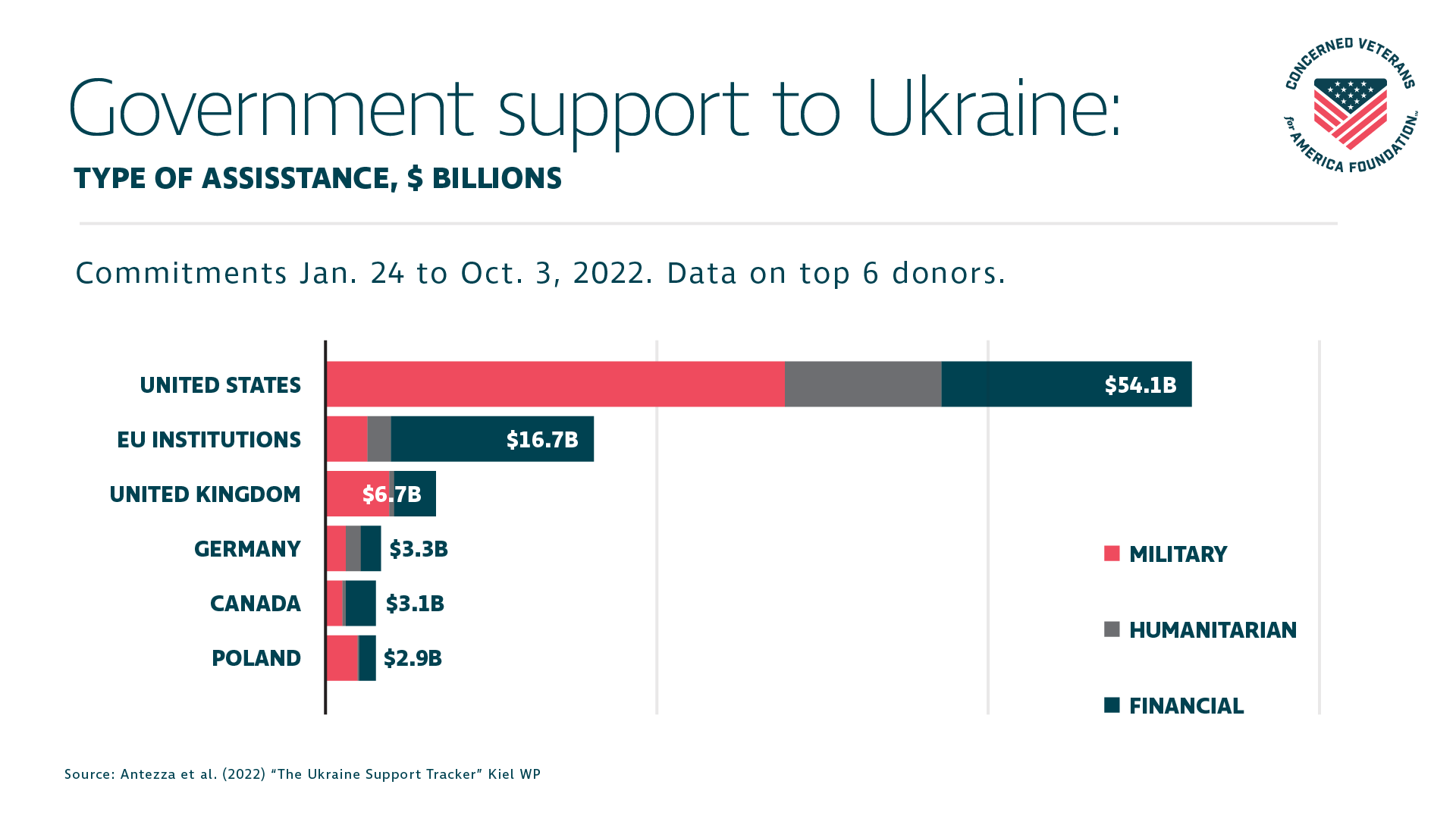 The United States has outspent every other country in Ukraine aid, including NATO allies and European Union members who are much closer to Russia and Ukraine and have more of a vested interest in the conflict

Finally, the high level of U.S. involvement in the war increases the risk of the conflict escalating further and getting the U.S. involved in a dangerous conventional war with a nuclear-armed Russia.

The nuclear risks of the Ukraine war became more real after Putin stated in October 2022 he would use “all available means” to defend what he considers Russian land in Eastern Ukraine. He even went as far as calling the U.S. use of atomic weapons in Japan in 1945 a “precedent.”

The dangerous saber-rattling from Putin should not be taken lightly, and remind the U.S. and NATO allies to consider the potential cost of supporting a maximalist strategy in Ukraine. As it considers aid to Ukraine, the U.S. must constantly weigh the risk of nuclear destruction that might not end with Ukraine and avoid choices that make the risk of this outcome unacceptably high.

A realistic and restrained foreign policy would see the world as it is, not as our diplomats and lawmakers wish it was. In Ukraine, this means keeping lines of communication open with Russia, no matter how deep our disapproval of its invasion, and continuing to understand the real risks for deeper involvement in a conflict involve and tailoring our policy going forward to put American safety and interests first.

Read more about how the United States should approach alliances with other nations.